Showing posts from March, 2009
Show All

I was fined for littering 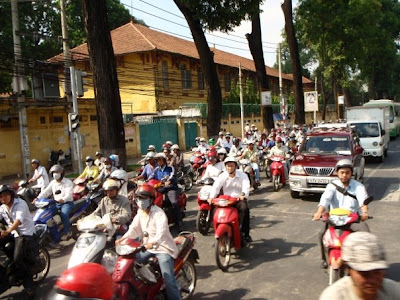 NB, I was supposed to be in Vietnam last week lo. I signed for oversea trip last year to Thailand remember. Supposed to be a student leader, meaning don't have to pay and it had been postponed to last week. Of course the location had been changed to Vietnam because of the rebellious political condition in Thailand. I was more than happy to have it change to Vietnam though. I went Thailand before but not Vietnam. But due to the trip postponed into my attachment period, so I can't go. But on a brighter notes, I called myself lucky that I can't turn up for the trip lo. I heard that I was boring like hell. 5 days trip and 3 day lecturing. 2 day R&R. I also heard that the location for R&R is visiting post office and zoo. Which neither of it seem to arose any of my interest. Ripped from bobs koh face book So conclusion, I didn't waste my oversea allowance on Vietnam, that's why I got a full $1750 allowance for Australia trip banked in hot under my account.
Post a comment
Read more 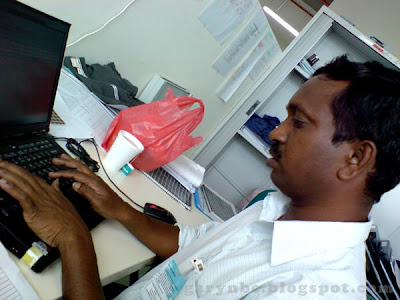 Wahaha , this is Mr Hari , hari , hari , hari , hari ...... I mean that was how I literately called him. Mr Engineer Hari . Sitting beside him is super hilarious cause he constantly mumbling nonsense which I had utterly no idea what he is talking about. I tried to make out his nonsensical words but only to result in fulitity. Try to listen to what he say. I am also amused by the way he eat. Or rather what he eats. It was so standard because he had been eating the same thing for the past 3 week when I was in the plant. Morning while waiting for bus, he will eat 2 pieces of pattima. Something like prata but is dryer. He said pattima can be stored overnight. At lunch, he had this gagartuan package of rice, with curry his friend cooked. He always massage the rice first before he eat. I reckon that he is trying to mix the rice and the curry. So funny. Very thrifty dude. His meal doesn't include any meat but he wasn't a vegetarian either. I think the lunch itself cost less than
Post a comment
Read more
- March 24, 2009 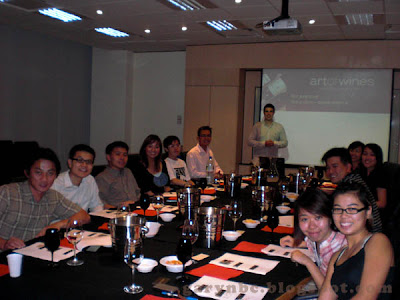 Hippo Campus is the best. A lot of bonding activities but most importantly, they uses Hippo's fund. So we don't have to pay a cent. So, of course I attended the unsolicited invitation to Wine appreciation. Btw , I didn't really paying attention to the speaker who speaks with a heavy France accents. I am not in anyway feeling disturbed because, I got used to funny accents already. Now I working with "China", "Myanmar" and "Indian" in New water plant. All speaking with their own unique tongue twister. I couldn't make out the words and I couldn't be bother either. Just nodding your head will do. I most importantly, look as if you understand them. And I noticed a remarkable Indian phenomenon. Indian genetically shakes their head as a gesture for acknowledgment, b ut not more than twice. People with high GPA took picture will pride. As if their are showing off with their result in their hand. People who are not so well done didn't
Post a comment
Read more 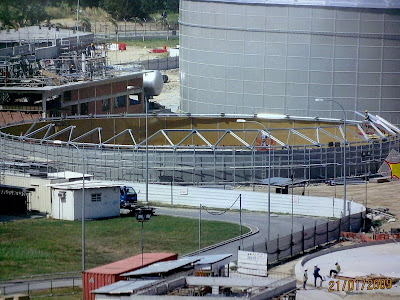 I following up from previous post, where I said that I was fascinated by the unique construction method for our storage tank. I thereby providing some visual aids in its corresponding time lines, just in case you can't understand what I had descried. I mean it the form of words of course. First, after constructing the first circumference which will be the highest level after the construction. They started to construction roof cover. I reckon the roof is convexly built to improve certain strength properties of the structure. Secondly, they had fully covered the roof with triangular truss, which I was taught that triangle gives the strongest and most effective strength to load ratios. Thirdly, Tank will be subjected to hydraulic pressure on the surface walls, which will later induce some tensional force on the roof. I assume that since the roof is convex it had a higher resistance to tension forces. Lastly, the tank will be raised one level, which they will carry on doing up t
Post a comment
Read more 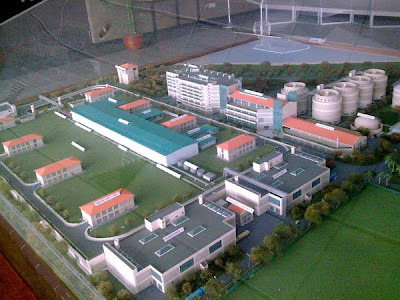 Not able to get any shot of the Changi New Water plant, therefore had to resort to the model. Unless you can't tell that I took from the model. If you wanna know the relevancy between the job I handled and the module that I studied, it is totally linked. Especially water technology. So after you studied water tech, you know roughly how the plant is working and what kind of treatment they are using, and of course the rationale and fundamental behind each component etc. So year 3, most likely I will op for membrane technology because it will be useful when I join the company later on. But sad to say, I wasn't as lucky as some of my classmate are. They got youngster around, funny or talkative people around. All of my job mates are very much to themselves. No common topic plus they are super busy and a lot to rush in this commissioning period. Totally no morale to work at all. 4 months, I wonder how am I suppose to drag through these shit. First time for me to go for IT fair.
Post a comment
Read more 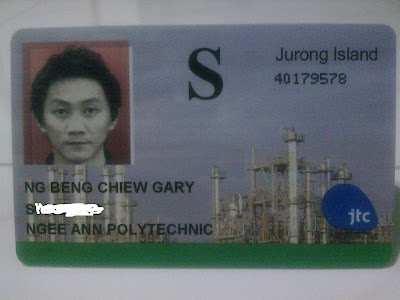 Attachment started 2 days ago. Excited and scary on the first day. Nothing to do at Jurong Island. Later of the day, realized that I had been posted to Changi New Water plant. I have been isolated from the group. All of them working at Jurong and I, myself only had to go and work at Changi. Not fair. Hmmm, actually I cannot say totally not fair. Just that these 2 different location had its good and bad points. Like in Jurong, the air isn't clean because the whole island is industries burning waste and emitting harmful gases everyday. Moreover working Sakra ( Sembcorp Ulitiltiy ) you only get to do the "everyday" stuff. Because the sakra plant had been there for centuries, many of the problems had been anticipated or rectified. You are performing nothing more than a robot, maintain here.. check check there. Of course beside all the bad point, you are working inside the main building where all the bosses and important people get to see you, know you. Of course you tend
Post a comment
Read more 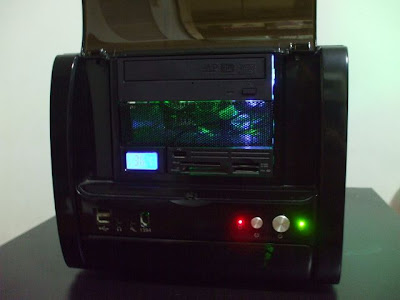 Hello world. I should be blogging using my new computer now, that is, if the guy had managed to delivery it to me by today. Nevertheless, I was so anxious to tell the world that I had got myself the mega gaming computer for my holiday. Yes!! Meaning I will be able to play my favorite "Fallout 3" already. It will delivery enough horse power for me to run 2008 released Fallout 3. It's supposed to run on high end computer only, because it is so graphically intensed. My new machine, besides aesthetically pleasing to me which looks like a fish tank. Have the following specs: Processor: Intel Pentium D 820 (Dual Core Processor) – 2.8GHz Motherboard: BIOSTAR P4M890-M7 TE RAM: DDR2 (800) – 2GB Hard Disk: Samsung – 250GB SATA2 DVDRW: PHILIPS DVD+/-RW Graphic Card: Gainward Geforce 8600GT 256MB DDR3 with HDMI LCD Monitor: VIEWSONIC 15 Inch LCD VE500 Beside powering by du
Post a comment
Read more
More posts